As I write this section I am Looking forward to 2022 it’s our 60th Anniversary! I am very proud for the contributions in the security community made by our Chapter including sending four of our Chapter members to serve as ASIS Global Board Presidents. We do our best to be a Chapter that gives by delivering great member support, and valuable programs open to all. Currently the world is two years into the COVID 19 pandemic response and recovery mode, amazingly we are still in the response period as we strive to recover, as layer after layer of consequences continue to unfold. Recovery is a challenging evolution, and our Chapter together with all Chapters and members around the world are a big part of the solution. In 2022, our 60th Anniversary year, The Southern Connecticut Chapter is strongly committed to supporting the ASIS International programs, by working together with our 34,000 members around the world. Through ASIS membership, one of the many benefits is access to a vast library of published articles, students can benefit from this resource and we will strive to engage local universities and their students providing the many resources of ASIS to grow our organization next generation, grass roots. We ask that our members and friends contribute to this evolving effort by sending comments and suggestions to chair@soconnasis.org .

Our Chapter is vibrant, thanks to a ten year renewal effort led by two recent past Chairpersons; Charlie Hickey PSP and Adelino DosSantos, plus a dedicated team of chapter leadership who collectively have many hundreds of years as members (and the gray hair to prove it). In 2022 our mission is to deliver a great take-away to each person who joins our meetings and events. We carefully select our speakers to ensure that the subject matter has a broad based appeal. Our Chapter has regular monthly meetings that can be seen and registered for on the side bars or on our events page. We add a Zoom Meetings platform where regularly conduct in person / hybrid meetings, on line meetings and Webinars.

On a personal note, long-time member Wayne Wasilko CPP convinced me to join ASIS back in 1985. Wayne was working on his CPP at the time (years later he loaned me his box of self-recorded cassette tapes with CPP questions and answers, then for six months I listened to Wayne’s voice in my car while commuting), quite funny! Wayne served our chapter as the librarian for more than a decade when CPP study materials, the 8 “Protection of Assets” books,  and guide sets cost over $1,000.00 our Chapter loaned out those items. Wayne was the perfect chief of the Chapter “book police” where Chuck  Kriewald (who donated the Protection of Assets book set) was the book police commissioner!

Notable Quote: “One great memory for me was attending the ASIS convention where Chuck Kriewald was honored. Remember the huge attendances for our monthly meetings in Norwalk.  Member and co-worker at Pitney Bowes, John Flannery was always at the door signing in members with his infectious smile.”  Wayne Joined ASIS in 1982, and became a CPP on 7/18/86 and has since retired. We all wish Wayne good luck.

Speaking of long-time members, a now ASIS Life-Member Chuck Kriewald is at our chapter leadership core, experienced leader, chapter  legislative liaison, and historian. Chuck has served as a super star in every ASIS capacity throughout our chapter and the northeast US region. See Spotlight below.

Many people ask, “what does ASIS stand for?”. Originally the name of the organization was The American Society for Industrial Security (ASIS), we officially changed our name in 2002 to ASIS International to reflect our extensive international expansion. Today there are approximately 34,000 members in 150 countries, and 250 chapters around the world. Each year, our International Global Security Exchange GSX hosts over 20,000 attendees.

A Brief Synopsis on the Founding of the Southern Connecticut Chapter of the American Society for Industrial Security:

By Past chairman John Foster:

The Southern Connecticut Chapter of the American Society for Industrial Security was founded in 1962, having split off from the Connecticut Chapter of the Society, which itself was founded in approximately 1956. The two men who setup this chapter were Joseph Tobin, who then worked for American Machine and Foundry in Greenwich CT, and Francis Hasson, Jr. who was Security Director for AVCO in Stamford, CT.

The first Chairman of the Chapter was Frank Hasson with Joe Tobin as his Vice Chairman.  For those members who lived in lower Connecticut. Other founding members who were officers in the first two years were Lou King from Sikorsky Aircraft, Henry Grady from American Cyanamid, and Fred Schaeffer from General Instrument Corporation.

The Chapter was basically founded because the Connecticut Chapter’s meetings were being held in Hartford, which was not always convenient for those members who lived in lower Connecticut. (F.G. NOTE: How interesting since so many countries like our International Sister Chapter ASIS Italy only have one chapter! With todays technologies we now frequently hold on line meetings with many different Chapters intendance from around the world). Both Chapters began meeting in New Haven and this practice continued until membership dropped in both chapters and the subject was broached about the possibility of reorganizing into one Connecticut Chapter, which was accomplished in June of 1966 at the annual meeting, with the provision that meetings continue to be held in the New Haven area. This continued until 1974, when the Connecticut Chapter, which had grown in size, wanted to have their meetings back in Hartford.

At this point the Southern Connecticut Chapter had grown in size as well and it was then feasible to have the two chapters in the state. A charter was delivered to ASIS headquarters by the Board of Director Ron Beatty, which was approved on June 24, 1974. The key people in setting this chapter up were Alex Autote from Video Techniques, Tom Carroll from American Cyanamid, and John Foster from Masonic Hospital. Meetings were then held in various locations in Fairfield County.

A good story! What’s yours?

A new day has dawned – the era of ASIS International Sister Chapters is official. Two years in the making ASIS Italy and ASIS Southern CT have made it official. The idea is to share best practices between two distant regions of the world, and to promote the international nature of Security, Life Safety, Business Continuity, and Emergency Response. At the moment our plans are modest and in development; we plan to have links and pages for each other’s chapters on our respective web sites, we plan on having regular phone and skype meetings, we plan on being connected on LinkedIn and sharing posts and comments, we plan on sharing other publications including “white papers”, we plan on meeting at our annual conferences. We are open to your suggestions and to your replicating our initiatives as they work for you.

The idea began at the NYC ASIS chapters 24th Security Conference and Expo. In 2014 at that security conference, the NYC chapter hosted a wonderful networking evening event at the New York Athletic Club. I was lucky to be there, and it was there I met among the many dignitaries, an ASIS International member visiting from Italy; Michele Pontrelli CPP, CFE. Being of Italian decent, and a lover of the culture, I was happy to make Michele’s acquaintance. We talked about the CPP exam for which at the time Michelle was deep into his preparations. His biggest challenge being that the exam was only being given in the English system of measure, not the metric system – food for thought HQ! We talked about ASIS Italy and the challenges of one chapter covering an entire country of over 59 million people. We became friends that night exchanging emails and followed up by sharing my exam study and preparation information with him over the course of the ensuing

months. It was a very happy day when I was one of the first people Michele informed of his CPP success.  It was during this time when we began to speak about building an international inter-chapter relationship.

We look forward to sharing our success with all of you in the emergency services, security, life safety, IT, and other like professions covering both the public and private sectors. Stay safe and please stay in touch with you likes, comments, following and connection requests. Best, Felix

Chuck Kriewald, together with most recent past Chairperson Adelino Dos Santos and the rest of the team are working hard on putting together more content and a timeline as a separate element. We will be featuring many individuals who played key roles in the Chapters 64 year life. The first of which is our good friend and chapter superstar Chuck Kriewald. 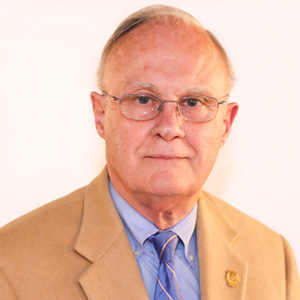 Chuck Kriewald became an American Society for Industrial Security member in 1974 when he joined the New York City NY Chapter. Recruited to be the Vice Chairperson his first year, “he drank the Kool-Aid”. Later that same year he moved 30 miles to the north east and became chairperson of the Westchester County NY Chapter. Ten years after that in 1984, Chuck landed in the Southern CT Chapter and has been with us ever since.

Chuck exemplifies dedication, In 1990 and 91 he served as the ASIS regional ARVP, in 1992 and 93 he served as the ASIS regional VP, between 1993 and 1995 he served on both the ASIS International Foundation Committee, and the ASIS PAC (we no longer have and PAC’s). In 2008 Chuck was awarded the ASIS E.J. Criscuoli Award. We are all so lucky for the good work of this amazing man. One of the most endearing things he has been doing for many years is the Invocation at each chapter meeting using the well worn book “Good Graces” by Patricia G. Warner. It should be noted that Chuck has been on the board of directors of the “Oyster Festival” organization. A beautiful community event held annually for many decades. Chuck has truly changed the world.

This section on our Chapter’s history is YOUR work in progress, please send in your suggestion and content for a well deserved member!

The Connecticut chapter is formed on the same date as the New York City Chapter both as founding chapters of the new organization.

The first international conference call between Sister Chapter ASIS Italy and ASIS Southern Connecticut. This begins a long history of conference calls, and email collaborations between our chapters

At the ASIS GSX Show: Sister Chapter ASIS Italy and ASIS Southern Connecticut hold the first face to face meeting between our chapters

At the ASIS GSX Show: Sister Chapter ASIS Italy and ASIS Southern Connecticut hold the second face to face meeting between our chapters

All are welcome to both the online and in person events of The Southern CT Chapter. We can’t wait to see you!

Thank you, and please stay safe!